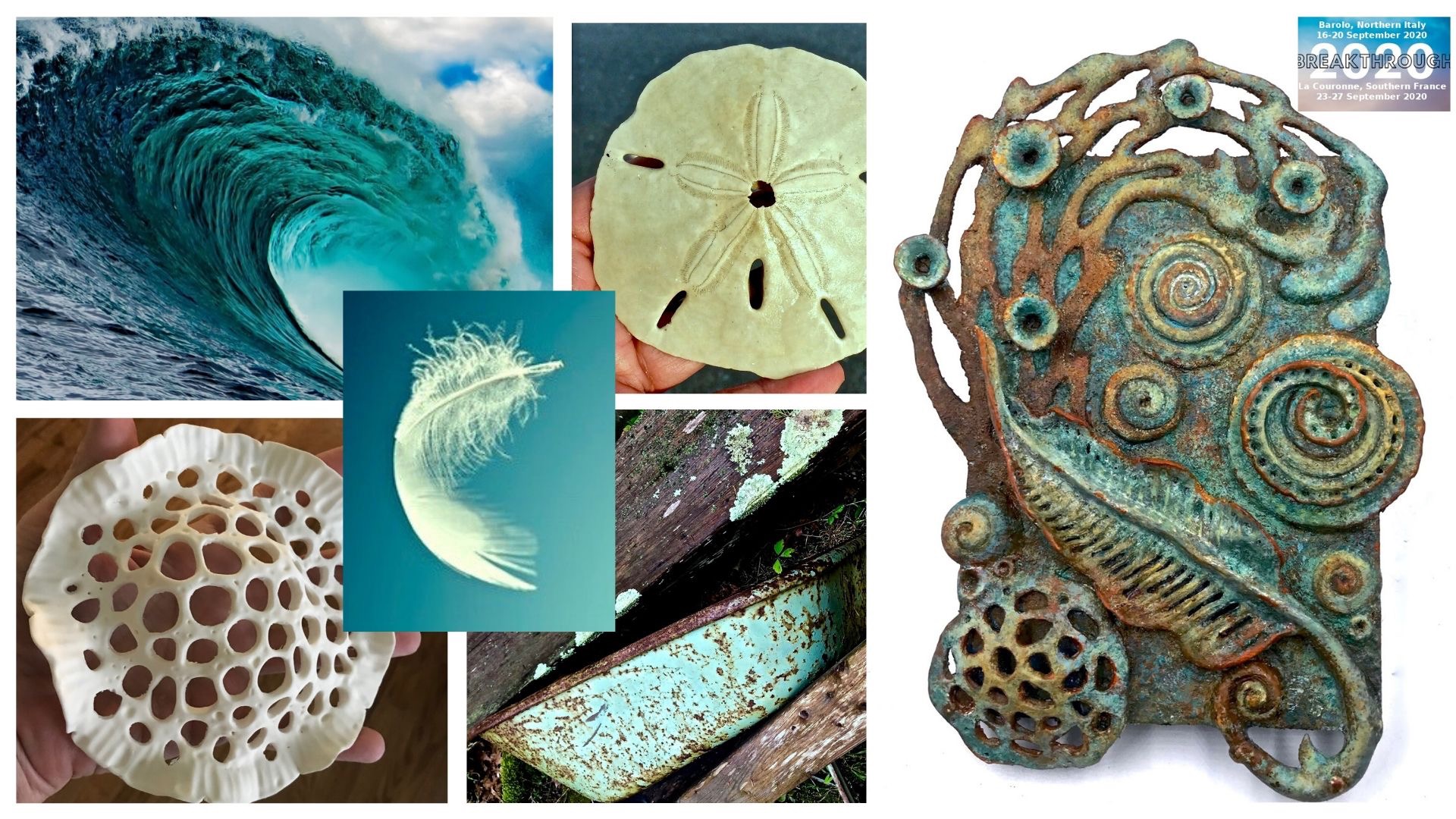 I surprised myself a few times during the making of The Wave. Except for the desire to create something flowing with a roiling energy, I really had very little else in mind when I started.  When creating my BioSystems I usually start by making  small elements that follow a theme of sorts. The sea, the woods, etc. I am in no way a realist artist, but staying within the parameters of a given idea helps me stay on track. So with nothing more than the motion of ocean waves in my head and no real end game in my sights, I allowed myself to breathe and let it be and asked the clay what it wanted.

UP FROM THE WELL

As I worked I began to see some unexpected sub themes emerge. Cutting out the wave like silhouette in paper put me in mind of the Japanese Master Hokusai’s Great Wave woodblock print. It’s hard to escape the influence of such an iconic image but realizing this relationship fascinated me and rather than worried me about ‘copying’. I felt energized and actually freer to embrace my own wave. As I added some smaller orbiting circular pieces I was struck again by the art history bug, only this time in the form of Van Gogh’s Starry Night sky. His rolling ribbons of sky and small comets, stars and suns were creating the barely contained energy I myself often sought in my work. And while I did not purposefully go looking for these inspirations, working without too much agenda allowed these old friends to visit me while feeling open enough to draw from my own well.

VARIATION ON A THEME

But the surprises did not end there. From the corner of my eye, I kept noticing a lone carved feather element I made for no reason one day. I was struck by how the curved, floating shape was reminiscent of the movement of my wave. Yet here I got stuck in my old habit of trying to stay within theme. Logic said that feathers and oceans don’t ‘go’ together. Even when the forms were so related it was like mixing metaphors in writing. I kept trying to add other shapes that were more sea worthy but none had the dynamic energy and unexpected pull of that errant feather. So I gave in, stopped fighting myself and invited the feather back to let it hang out until we were all comfortable together.

My final surprise (yes, another!) came at the very end. I had originally painted The Wave in my usual soft overlays of mid pastel glazes. But it felt lifeless, bland and safe and even after days of work I was ready to chuck it all. That’s when I remembered a rusty wheel barrow I had

recently photographed. I pulled out my deeper more contrasting paint colors and stipple brushes and just attacked the piece full throttle until I conjured up a verdigris/rusty effect. I absolutely loved this last minute transformation and the way these new colors pulled all the disparate thoughts together into a cohesive piece. It was with great relief to understand that I couldn’t care less if I was on theme any more. Today I see this as an important transitional piece. A wrong-way turn that set me on a new way of thinking.

What did I learn?

At the Breakthrough2020 retreat you will:

This website uses cookies to detect whether you are logged-in which enables us to give you access to the services you have purchased. We don't use them for any other purpose. We'll assume you're ok with this, but you can opt-out if you wish.Accept Reject
Privacy & Cookies Policy
Necessary Always Enabled